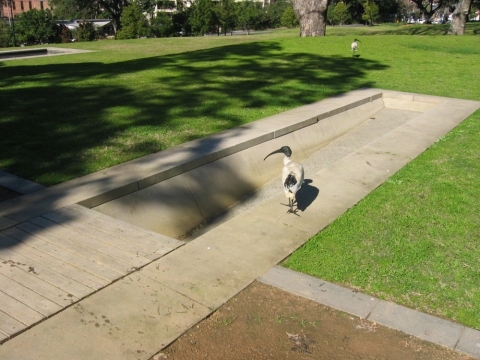 The materials which I use in my work are diverse. This piece is a public park in Sydney, Australia. In collaboration with landscape architects Spackman & Mossop I was commissioned to create a terraced water garden using indigenous sandstone. This park called “Cook and Phillip”, was opened to the public in January 2000 and was part of the citys’ push towards creating innovative sculptural interventions throughout the city for the Olympics in September 2000. My gardens are known asthe Yurong Water Gardens.

The choice of material refers to the abundance of sandstone which is visible throughout Sydney’s architectural history. Water draws reference to the original creek, which flowed, exactly at the site over a century ago.

The scale and placement of the rocks have been deliberately designed to relate to the site’s relationship to St. Mary’s Cathedral whose spires and grandeur loom above. The simplicity of the shapes and forms of the sandstone rocks in the Yurong Water Gardens form a dialogue with the ornate detail of St. Mary’s which is visible at the site in a counterpoint of intimacy and grandeur, simplicity and intricacy, old and new which are in the same language of materials.

The use of water is a memory of the water originally at the site as well as reference to the aquatic center which is “all about” water. It is a continum of what begins at the center to culminate in a garden-like setting.